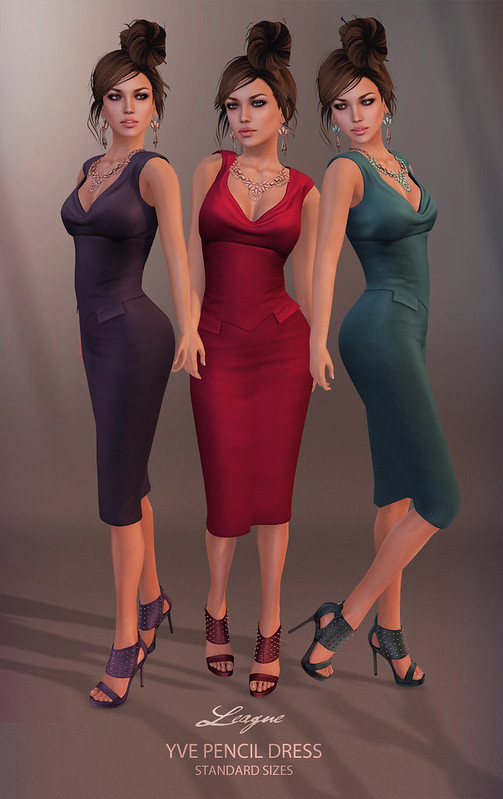 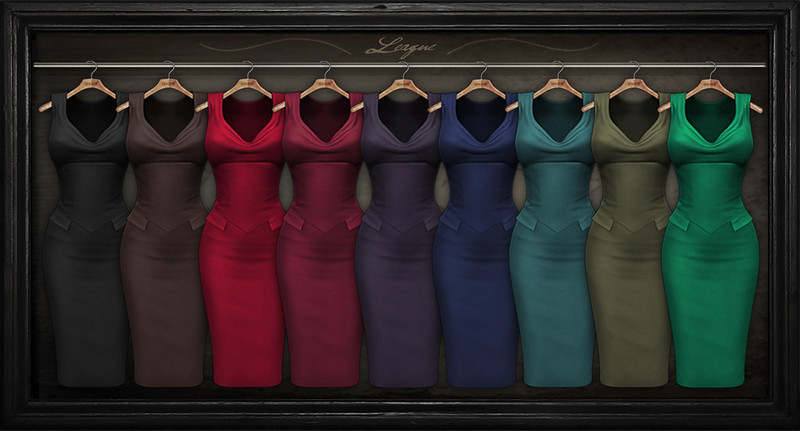 League Floral Rocks Jewelry Set
This crystal necklace & earrings set includes a Hud for Resizing if needed, and Tinting the Crystals any colour and shade in the spectrum, large Crystals and Small Crystals on both Necklace and Earrings can be tinted independently in different colours.
Also includes choice of 3 metals (texture change) 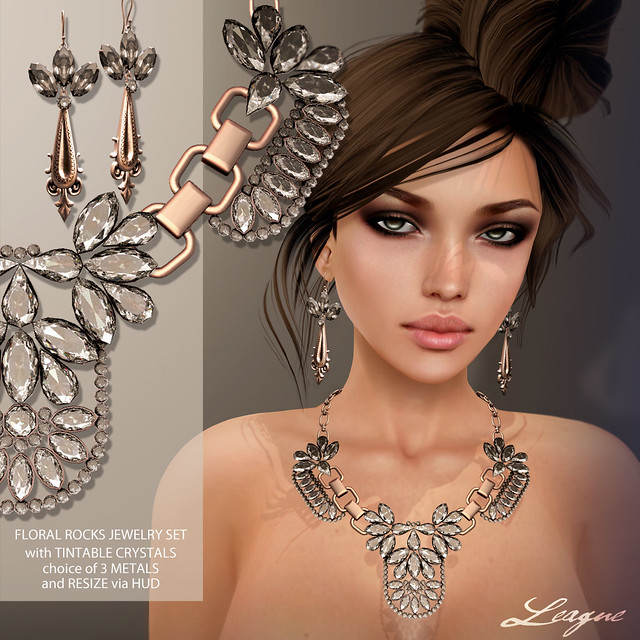 League Floral Rocks Jewelry Set Solid Teal/Aqua and Solid Apricot/Pink (below)
These versions include a Hud for Texture Change and Sizing
Large crystal textures change independently from the small ones enabling multiple combinations.
Also includes choice of 3 metals.
(Listener channels match for both the Teal/Aqua and the Apricot/Pink Sets, so more combinations can be achieved by buying both Sets and alternating Huds!) 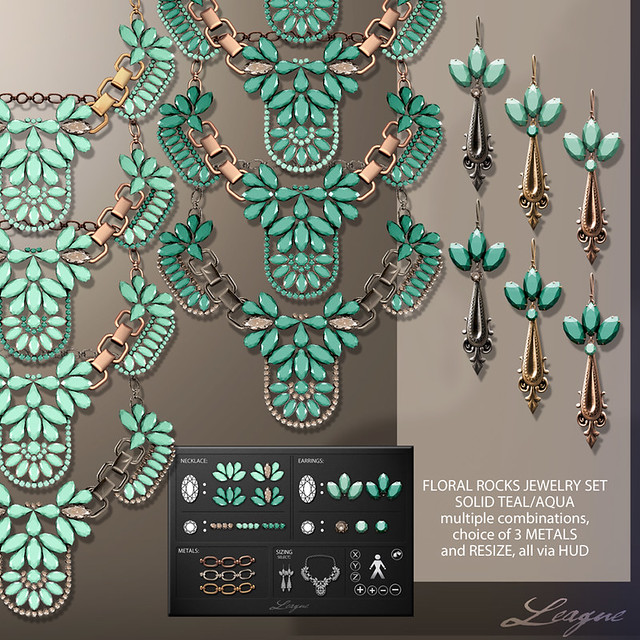 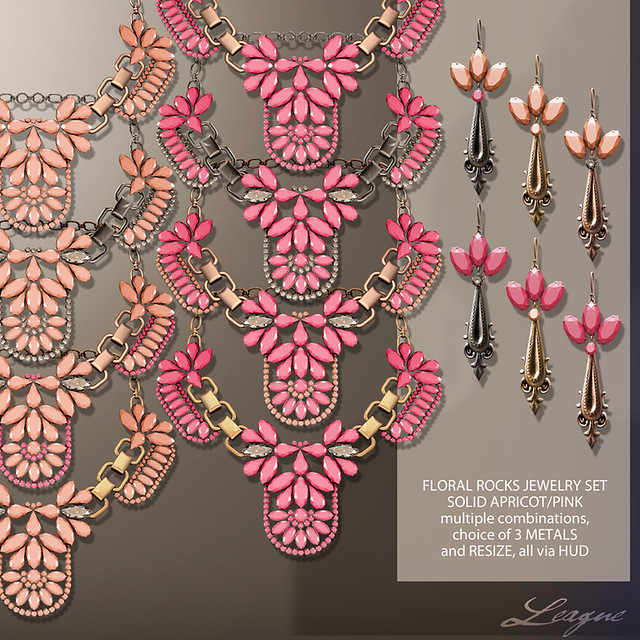 Available in 6 Colours, each include a Rigged version and an Unrigged Version with Resize HUD

Try the DEMO before purchase! 3 Styles of Corset; Leather, Lace and Dayglo, each come with various options via Hud including 4 Stud Metal options, a no-studs option, 2 sleeves Options & Sleeveless.

Individual skirts include a clean and dirty version and do not include a HUD, the Nyx Skirt Fatpack however includes a special HUD with all options, see below:

New Releases are exclusive to the Whore Couture Fair from today until the end of March, after which they will be available at League Mainstore.

Geometric Dresses for One Voice

New Exclusive Release for the One Voice event, of which a scripted 100% of proceeds go to the cause.
Each dress is one full colour (as shown on the model on the right and center left), including 3 cuts and multiple layers, to be worn as a dress, a long top, or a crop top, but also to be combined with other colours to create your own looks like the examples shown on the other models.

These are available both at the One Voice Event and at the Mainstore, vendors at both locations donate 100%.

Curio’s Gala Phoenix is currently in the midst of legal issues which have resulted in her content being removed from the grid, pending the outcome of her legal battle. The Digital Millennium Copyright Act (DMCA) process in Second Life requires that when there is legal action taken against your content, Linden Lab will remove it from the grid until a ruling is made. Gala’s fellow content creators have come together to host a fundraiser to help with the substantial legal costs she will incur in contesting these baseless claims.

The fundraiser will be held from July 9-22.

This fundraiser is not only to help Gala Phoenix, but to also take a stand for the community of content creators, for many of whom SL is their main source of income. This could happen to any one of us, and it’s necessary that we stand up and fight back to ensure that it doesn’t.

New items available at Culture Shock 2012. Each item is exclusive to Culture Shock during the event duration. Special metallic Make Up available in Gold, Silver, Bronze & Copper, or Fatpack- Fatpacks of the Metallic make ups, as well as the Cruz make up pack contribute 50% to Medecins Sans Frontieres which is the charity for this event. The scoop dress is also available during the event in a never before released silver version.

There are demos of the make ups available to try, so that you can be assured of the perfect fit to your skin.

For other League items visit the League Mainstore orMarketplace

The Organic Silk dress and top comes on all layers with modify prim parts.

Pick it up @ League Mainstore or Marketplace

Now available in the League Mainstore in Second Life .